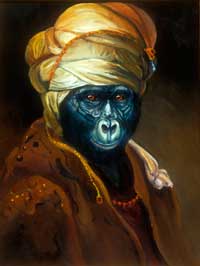 The work of Louise Francke is to be published in the Best of Worldwide Wildlife Artists (Kennedy Publishing in VA.) Here’s what she has to say about one particular painting in this series: It is rare that I choose to keep one particular oil painting. This is my favorite! Carlos as Rembrandt’s Oriental was the first painting in this series of 30+ works. By putting the endangered species into Master Paintings, it was my way of bringing attention to the preservation of biodiversity. The emphasis is on preservation. Carlos still whispers to me even though he is now deceased. He reminds me of the days at the NC Zoological Garden when he sat on the other side of the glass wall and watched me drawing him. It lasted  45 minutes and then he tapped on the window and made a facial puckering of his lips before he rose and left. 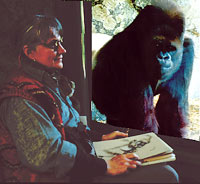 While there, I heard a couple of stories about him which I’d like to share with you. He used to dance in his cell with a sheet. Perhaps that’s where I got the idea of the turban. There was another story about how one day he had found a dead bird in his padlock. Because the apes had been taught to render up anything found for a treat, he proceeded to de-feather the bird for a gold mine of treats, in particular celery. I enjoy so much living with my menagerie of the endangered and especially Carlos that I could not bear to part with him. Every time I gaze into his eyes, I wonder if we will succeed in preserving this ape species. They seem to be speaking to us subconsciously if we would only listen. Recently visiting the Atlanta Zoo brought joy to my heart in seeing so many lowland gorillas in their breeding program.