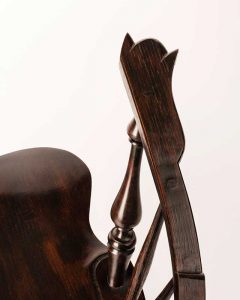 If there is one iconic tool of the chairmaker, it is the drawknife. In my youth, both Drew Langsner and John Alexander taught me its use. I had the drawknife licked, or so I thought.

Several years later, 17-year-old Curtis Buchanan agreed for me spend a week in his Jonesborough, TN Windsor Chair Shop. Curtis effortlessly and without measurement whittled a complicated chair spindle, handed me the drawknife, and told me to make him some spindles. The firewood box claimed the first three, but the rest had some slight potential. Four or five years later I was making spindles as fine as Curtis’s and I was happy.

One January I embarked on my Great Northern Tour, the ultimate goal being the Vermont home of Curtis’s mentor, Dave Sawyer. Dave is an MIT graduate who builds a chair like a Ford truck: precisely by the plans. He wanted me to carve spindles. No problem, I thought, I’ve whittled hundreds of spindles. The first took ten minutes and landed in the wood stove. The next claimed fifteen minutes with a similar end. The third took twenty minutes only to join its charred and flaming friends. Dave said that, “I carve spindles… like a boy scout with a pocket-knife.”

Slowly, I realized that true craftsmanship is not a destination, but a road to be traveled. It’s a rather pretty drive, but with plenty of detours, potholes, and the occasional groundhog. But I keep traveling that road.

Art for Wildlife by Emily Weinstein

My day started out by catching a field mouse in the house. Thankfully, the animal…

There are no upcoming events at this time.