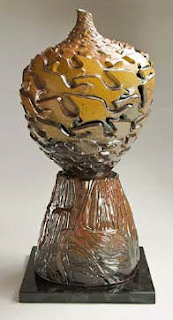 I recently finished a video about a fellow OCAG member who creates magnificent ceramic art pieces. We wanted to record a demonstration of her work in process, as well capture her thoughts about how she uses her minds eye to create pots that are either metaphysical or bio-geometric. (You’ll have to watch the video to find out how she conceptualizes her work.)

My first challenge was to do various tests (at three locations at Judith’s lovely home) with a new, fancy, seriously high def camera. It has more options than any mortal needs, but if you know me, I am one determined girl who follows through until I can successfully manipulate the technology. Not only was there technology to master, but Judith had to try on about seven different shirts to see which one we thought would have just the right amount of color and pattern.

After testing, I decided we needed to pump up the light on Judith when we were in her upstairs “gallery space”. That space had light streaming in on two sides, where her lovely pots were posed nicely on top of various pedestals. We would position Judith in the center of this arrangement. I was delighted by this look that felt to me almost cubist.

Both in the studio and upstairs, Judith and I wrangled large, unwieldy soft lights into small spaces. We made sure the lighting on her was just so, and we were careful that her face didn’t look washed out or too dark.

Another challenge was that Judith’s process – that involves cutting through the wall of the piece, altering, carving and sculpting surfaces – is complicated. The part that we wanted to shoot occurs over just a few days. Fortunately, she’s down the street from me so I could zip over to her house in a jiffy.

While shooting, the most successful scene was a shot that we hadn’t planned. I was messing with different settings and told Judith to ignore me. I left the camera recording because I like to later review how different settings affect what I see. When I played the clip back, I realized that Judith said under her breath something like, “This really takes forever – why am I doing this?” Friends have said this was their favorite clip.

Our last challenge was the sequence we shot outside Judith’s studio, which served as an intro to the piece. One day we were rained out and another day, light became the issue once again. When I exposed for the right detail on Judith’s face, her pure white hair lost all its texture and bloomed way too bright. I finally figured out a way to compensate, but maybe she should have worn a hat!

We did finally wrap things up, I moved the project into the editing phase, and compiled all three segments into one show. We are both finally pleased with a project that was carefully conceived and executed.

So take a look at the results, and I hope you enjoy the video showing you how Judith makes her pots. Her process is what interested me in the project to start with.

Crawford Horne Fires Up The Kiln

The Start of Something Fresh for Spring

If you are looking for art that is fresh and special this spring, an event…