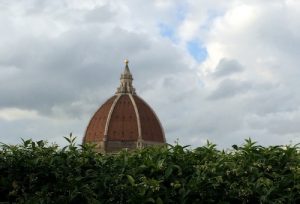 During the Renaissance, artistic ideals changed from a serious and formal way of depicting subjects, generally religious,  to a much more realistic style incorporating scenes from common life. “Man is the measure of all things” was the motto of the time, and painters began to include details from daily life in their frescoes. With the invention of the perspective, paintings acquired a firm place in space and the traditional subjects of these paintings became individualized objects of interest rather than stereotyped, idealized ones. Looking at these old paintings, one should also remember that this work was created when man was really discovering the world around him, especially individuals in Florence who knew much of what there was to know in the civilized world at that time. The jewel in the crown in Florence was the Brunelleschi Dome on the Cathedral Santa Maria del Fiore, the unsurpassed architectural triumph of the Renaissance and the heart of Florence. 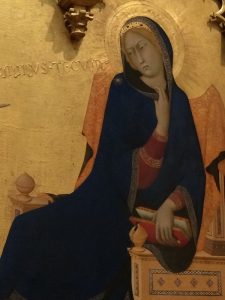 Galileo lived in Florence during this time and to this day you can feel his presence in this amazing city.  The most well known artists also worked in Florence and probably knew each other during the 1400s and 1500s. They doubtless influenced each other and spread the knowledge of how to paint and to solve technical artistic problems in their various media. These artists were interested in all things human, and delighted in depicting people realistically.  They paid a lot of attention to hair and clothing, details of interior decoration and architecture, and they tried to convey human emotions in ways that had never been done. The amazement of Mary when faced with the Angel Gabriel is depicted many times, as seen in this altar painting of Mary in a delicate pose with the traditional gold background. She looks dismayed and alarmed as she gathers her blue cloak tightly around her with her right hand. She keeps her book still in her left, marking her place with her thumb. 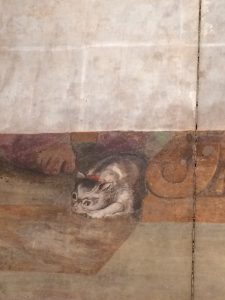 The image of the Last Supper, at the moment when Jesus tells his disciples that one of them will betray, was painted in nearly every monastery dining room, showing individualized portraits of each man and their different expressions and reactions to this awful news. But there is also attention paid to the practical details of the meal: the crumbly bread, the starched and rarely used table cloth with its sharp folds, and a small dog or a cat under the table (as seen in the example.)

In one monastic dining room, there is a line on the wall indicating how high the water came during the flood of 1966, when the Arno River rose and covered most of the city in mud. There has been a flood every century, all well recorded, but the one in 1966 was the highest of all. In the refectory of a Benedictine monastery the water came up almost 11 feet, covering much of the Andrea del Castagno fresco. Restoration experts and others came from all parts of the world to help remove this fresco, clean it, and put back in the monastery.

It sounds impossible, but this kind of restoration was done all over Florence. 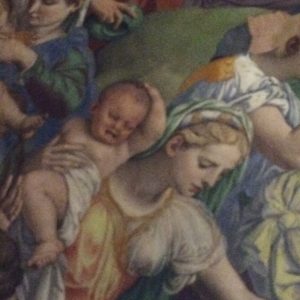 During the Renaissance, human emotions other than the abject grief of older alterpieces began to appear, and we start to see an interest in the ordinary and the mundane. A good example is this fresco of the crying baby with his serene mother, which is from the chapel of Eleonora di Toledo by Bronzino (Palazzo Vecchio). In this marginally religious altarpiece, a mother and baby are part of a group of people who have come to a river to delight in the water and wade in it, scooping it up with bowls and jugs to drink. 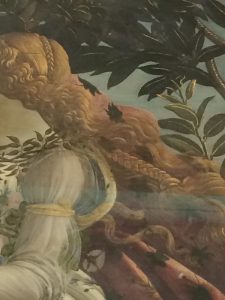 The depiction of the human body in frescoes from this time reflects the careful exploration of physical details such as women’s hair, reaching a climax with The Birth of Venus by Botticelli, which showed astounding masses of hair and braids, ribbons and diaphanous clothing. Botticelli’s style is realistic but also retains the idealistic. Showing the perfect human body with beauty and grace, he sets up a delicious linear rhythm in his compositions. You might say his Venus painting is both realistic and ambiguous, with its theme from antiquity yet in its pagan world. Completely secular paintings were still rare, although the art of portrait painting reached great heights at this time, Botticelli especially, who painted wonderful portraits. Painters from this time made very detailed depictions of garments, such as sleeves in layers, tunics and cloaks, shirts and sandals, sometimes showing both sides of the material. Sheer fabrics must have come into fashion at the time, especially for women, as the see-through blouse or robe is seen in a great many paintings. 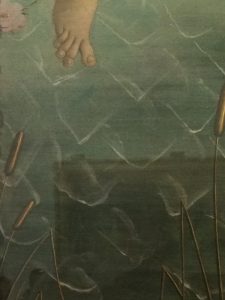 Painting water and waves in a realistic way was not mastered until much later and there was no tradition of painting landscapes in early religious art. Giotto would put some rocks in the background indicating a barren landscape or sometimes a painter would suggest a vague and distant mountain to hint at the afterlife. With the Renaissance this changed as well. The background became larger and with details in both the foreground and further back, with real attempts to depict depth. The discovery of perspective with one or two vanishing points changed the appearance of altarpieces entirely. There was no tradition in painting water but there were early paintings showing water as a mirror-like surface reflecting human forms. Botticelli tried with great energy and imagination to paint wave action in the Birth of Venus, painting each wave as a triangle with some froth around the edges. It doesn’t look like waves but it does however read as water, perhaps due to the realistic coloring.

In the Renaissance, it was the human body that aroused the greatest interest and which painters seemed to enjoy most.  Just look at the wiggly toes from the left side of the Birth of Venus painting! The toes belong to Zephyr, the Wind, whose great speed and joyful movement is evident both in his body position and his great bellowing cloak.

I always look for the revealing detail when I look at art, the sometimes exquisite small gem that reflects both the artist and his time. Renaissance frescoes are full of these, reflecting the sheer joy of life in all of its manifestations.

Anita joins five other artists for an annual invitational show titled “Abstraction”. The reception is Friday, June 10th from 6-9 at FRANK Gallery in Chapel Hill. Here is more info about FRANK.