The biggest challenge in painting is creating a composition which not only draws the viewers in but speaks to them. It is even more of a challenge when the painting has been commissioned.

Before Adobe Photoshop, I layered my cryptic and undecipherable sketches. There was a lot of erasing on many mylar sheets. Some compositions came together rapidly but others were difficult when both proportions and placement had to be changed. Now, the computer allows me to alter proportions and move elements to more advantageous positions, archive jpgs, and layer the work. Midway and in the last stages of the actual painting, I review a jpg of it in the computer and tweak the colors and contrasts before doing so on the canvas. 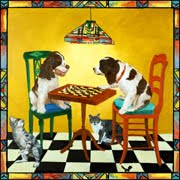 My ideas come when something I see sparks my imagination. The “Check Mate” set was an area in the client’s home and just waiting to be part of a painting. Initially this painting was to have been only a portrait of a her two Springer Spaniels. As ideas and discussion via emails progressed, her two cats were added. Then a totally different painting emerged when her son was included. I photographed all objects and figures in “Check Mate” digitally. Each item was separated out into individual layers before merging in Photoshop: Chessboard and the chess pieces on the game table plus two chairs were arranged and rendered a different color in Photoshop. (4 layers merged) The stained glass lamp was separated from its base to hang above and light the area. Its edge was used to create the framing device. (5 layers merged) The tile floor was in a different room. (1 layer with perspective adjusted) Dogs and cats were photographed separately from many different viewpoints. The paw of one Spaniel was fabricated to create the challenging pose. (5 layers)

Once everything worked spatially and led the eye around the composition, I flattened the image. Next, I worked with color adjustments: hue, saturation, curves, and finally filters to sharpen or blur certain elements. The composition was sized in the very beginning to the canvas/panel dimensions. Once a grid was superimposed the composition could be mapped out on the painting surface. No matter what the computer design, a painting on the easel dictates what it needs.

“Aviator Jack” was born into a family of pilots. Knowing this, it influenced how I saw Jack, my red headed grandson. Every element was a different layer: Jack’s gesture on the diapering table was rotated to a vertical. Snoopy was changed into our Dalmatian with her spots and the helmet and goggles from an old photo were added with a scarf. This head gear was used and manipulated to fit Jack. His quilt with biplanes was photographed and later readjusted to simulate a cockpit and aerial landscape view with hills and valleys. The biplane was a toy. Although tempted, I chose not to make it hang from a wire in the painting. Sky was created in photoshop and enhanced when painted. Colors were saturated and darkened more to emphasize the shadows.

So a composition is created when ideas are gathered and the sum of all the parts contributes to the finished visual experience. Finally, I commit it to oil.

For an evenings entertainment, please visit my web site and let me see you smile: http://www.franckearts.com.