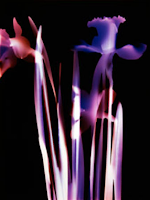 This year was my first year on the tour and it was amazing. Putting the house in “gallery mode” was a huge job, but well worth it. Welcoming the public into my home and sharing my work and my processes with them was an extremely satisfying and inspiring experience. Never have I felt so sure about my decision to be an artist. And as if we didn’t all know how small the world could be, at one point I had a neighbor, a friend of a friend, a fellow artist and perfect stranger all conversing… turns out we were all connected socially, yet had never met before. Here’s to the studio tour, building communities, artistic and otherwise alike!

I am a children’s writer and illustrator. During my tour this year, over and over, my studio was filled with folks laughing to or among themselves or caught by surprise or turning to each other, saying, “Oh, look at this one.” Many people commented on the overall feeling of joy, happiness or comfort, tenderness or pathos in the work — mighty satisfying for an artist. A number of wide-eyed young artists and authors stopped by to meet, as they say, “a real, live author.” Many people said some form of: “I’ve given your books or art over and over to people I love” or “I love coming here and seeing what you’ll do next.” 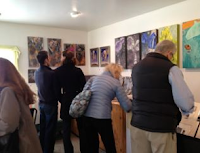 This year, Luna Lee Ray and I shared a studio at Luna’s, and it was so much fun. Studio guests were interested in our work on many levels. I had a beekeeper talk with me about her bees and my beeswax collages, and then a musician and I talked about the similarities in our experiences as artists. Several people expressed a desire to learn more about how to make art and talked with Luna about her classes. Some were “just looking” but very interested, while no interest was expressed by another — our youngest visitor, 2 months old — who slept through the whole thing. But that was just wonderful too. 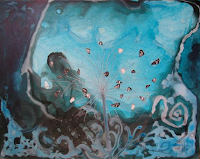 A couple of women looked at the painting Luna and I did together and it was amazing to hear what they saw in the painting. Last but not least we did have very good sales. So a huge thank you to all the people who come out to support the artists of Orange County during the tour. Thanks for not only by buying our art but also by expressing a genuine interest in what we do.

As each new visitor stepped across the threshold, I had a five year old grandchild greet each person and ask them to sign in. At one point when we were fairly busy, little Katie positioned herself in the center of the room and then suddenly announced in this charming childish voice, “Time for introductions! ” Who can deny a five year old? All the visitors looked her way, nodded and then starting shaking hands with each other. 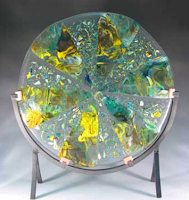 Those that had come here on their own suddenly had new friends to shop with! Also, since some folks had already received a short tour of the silk and glass studios, and I had also demonstrated how the loom works, visitors felt comfortable explaining what they had learned about the processes to others! 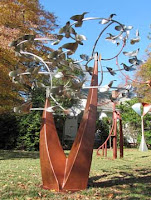 My sculpture is readily visible for people to enjoy, but the Studio Tour makes the welcome official for those who need an invitation to explore the yard.It was obvious that the economy had many people more reticent to make big purchases. I was prepared for the possibility that most of the larger sculptures would be beyond what most people wanted to spend. I had one piece left from a sculpture series created during last year’s run up to Studio Tour, a series I’d titled The Whirled Series, games 1-7, in part because I’d made them while listening to that year’s baseball World Series. This year, in a fashion akin to this year’s baseball drama in St. Louis, at four o’clock on the final Sunday “Game Seven” left the park and found it’s new home. And so the Studio Tour fulfilled all its functions – good conversation and cheers from appreciative fans, a chance to encourage new artists who need to see how one might go about creating the setting for a life devoted to making art, and enough commerce to make it possible for this artist to create another day. By my lights, a very successful Tour. 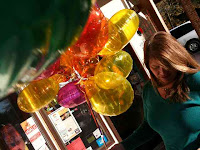 After rushing around all day on the Friday before the tour I picked up 18 helium filled balloons from Balloons ‘n’ Tunes. It was a terribly windy day with intermittent showers. When I arrived at my house I opened the back door of my SUV, grabbed the groceries and went inside. A few minutes later I went back out to close the car door and realized that all of my balloons were gone! They were nowhere in sight. What was I going to do? While stomping and stewing in my driveway the UPS truck pulled up with some art supplies I had ordered. 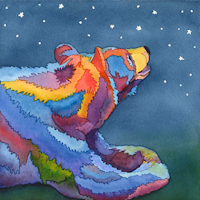 While waiting for my package I looked up above the truck and there, hiding in the maple tree were my 18 balloons! They were perfectly camouflaged! I quickly asked the UPS driver if I could stand on the top of his truck to capture my balloons. He didn’t think that was allowed and muttered something about liability. Immediately I remembered that the extension ladder was behind the garden shed. I grabbed it and extended it 15 feet up the tree. After untangling the ribbons from the tree branches I was able to successfully wrangle them into submission and coral them back into the car. Whew! It was a close call and way too much excitement on top of an already busy day. Next year I think I’ll pass on the balloons. 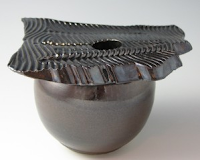 Coolest comment made by a visitor at my Open Studio: “You don’t realize what an integral part of our community the artists are, until you drive around the county during the tour and see ALL the tour signs. They really are everywhere!” It’s one thing to occupy Wall St.—but in my opinion, we need to “occupy the local economy,” encouraging folks to think of artists and small businesses first when contemplating a purchase for gifts or goods, year round. It’s only by supporting individuals and small business that we can truly transform culture, and thereby transform the economic culture.

Special thanks to the artists who contributed these stories to this special article about our experiences with the tour. We hope you enjoyed it. And for terrific visuals, check out the work of all OCAG members at our website.

A Toast in Hand for Our 20th Anniversary

It is truly amazing:  2014 is the 20th year that Orange County has been offering…