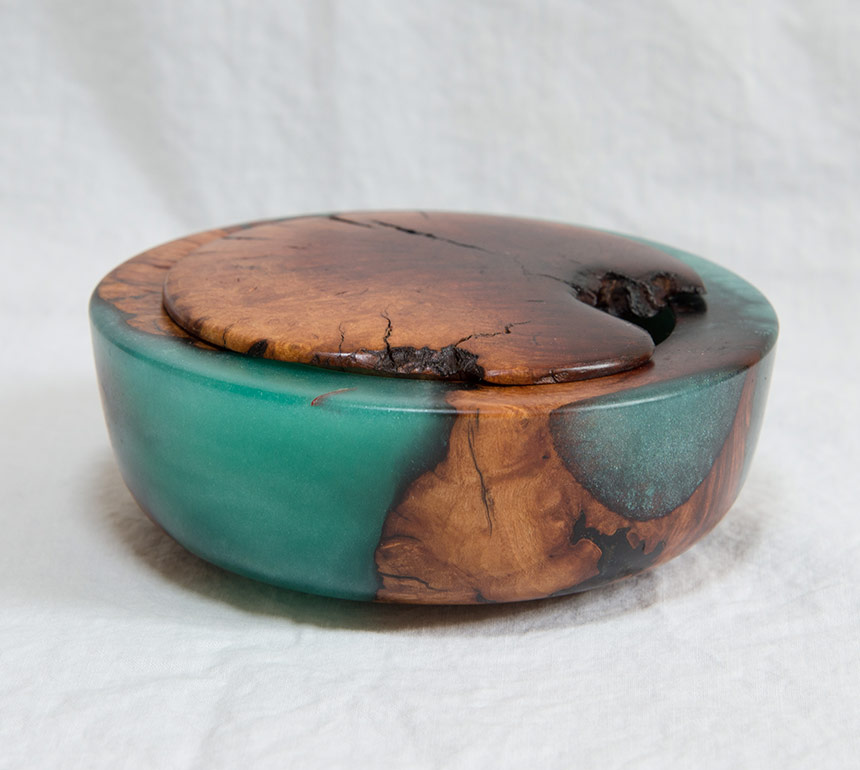 Woodturners are always on the lookout for beautiful pieces of wood: those with interesting colors, grain patterns and voids.

In recent years, I have augmented my wood collecting to include species and other samples that provide an opportunity to combine the wood with epoxy resin.

Manzanita, a western woody shrub, is an excellent example of a wood that combines well with epoxy. Mixing wood and resin allows the turner to add color and to create interesting margins. Wood pieces with many voids might be unstable on their own, but placing such pieces in a mold and then adding resin provides a stable turning blank and the possibility of highlighting the voids in the wood.

Creating a woodturning blank involves several steps. First, a piece of wood is identified and pre-shaped according to the turner’s artistic plan. Second, the turner builds a mold and seals it so that epoxy is not lost during the curing process. Third, the wood is placed in the mold and then covered with epoxy. Fourth, the pouring is allowed to cure under pressure which guarantees that the epoxy is clear when hardened. Finally, the wood-epoxy blank is removed from the mold, mounted on the lathe and turned. The following are three examples of pieces I have made from combinations of wood and resin.

The first example is titled Land and Sea. It is a box made by casting Manzanita and blue-green epoxy resin. The lid is a solid piece of Manzanita. This piece displays interesting margins between the wood and resin.

The second piece is titled Manzanita Grotto. It is also a combination of blue-green resin and Manzanita, but in this case, the bowl form with its grotto-like bottom rests in a pool of resin in the center of a Walnut base.

The third example is more daring than the others. I cast a longleaf pine cone and then turned away the core of the cone to create the illusion that the blades of the cone are floating.

What I like most about combining wood and resin is that it has expanded the artistic possibilities of my work while allowing me to use traditional turning skills and tools to create highly unique pieces.