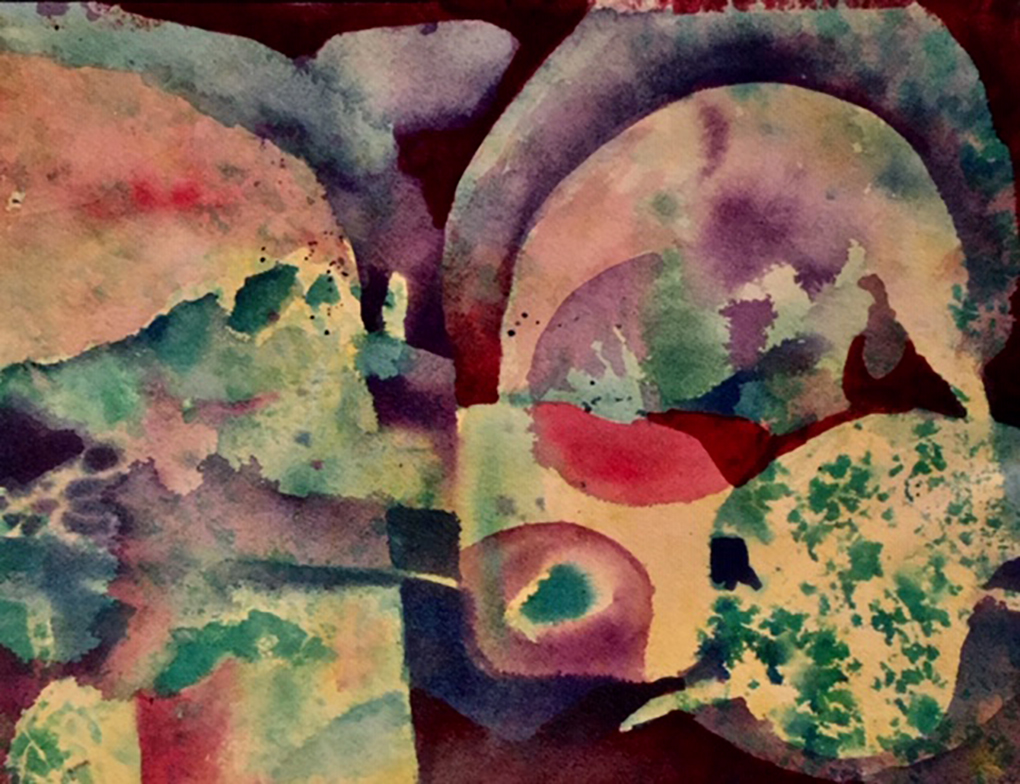 One of the ways that I like to paint is to simply allow my hand to create colorful shapes in a seemingly random pattern, until a coherent painting forms and begins to look ‘finished’. This can be done using any 2D or 3D medium. I often listen to music that matches whatever mood I’m in when I start to paint. I then quite simply ‘let the music take me where my heart wants to go’ (from Cat Stevens circa 1975). The first piece is a 13x17inch liquid acrylic that was actually started by playfully stamping a color soaked sponge through a stencil. It was then elaborated on in the process described above. I painted this piece in just 20 minutes while sitting in a room full of Art Friends, as we talked and listened to music together. At first, I was just playing around with color. But soon something magical started to happen, and the forms and colors started to gradually come together of their own accord. It’s often like that for me, I seem to need to go into what I call a ‘creative trance’ where I’m no longer in charge of the process, in order to produce my best work. Quite frankly, I often think of abstract painting as a type of ‘spiritual practice’, something that comes through us, but is not consciously created by us, until we start to refine the image through an editing process. This may sound strange to those people who are more deliberately focused. Nevertheless, it is one way of painting that can be extremely fulfilling and that can be a powerful way to express unconscious or barely conscious thoughts and feelings. 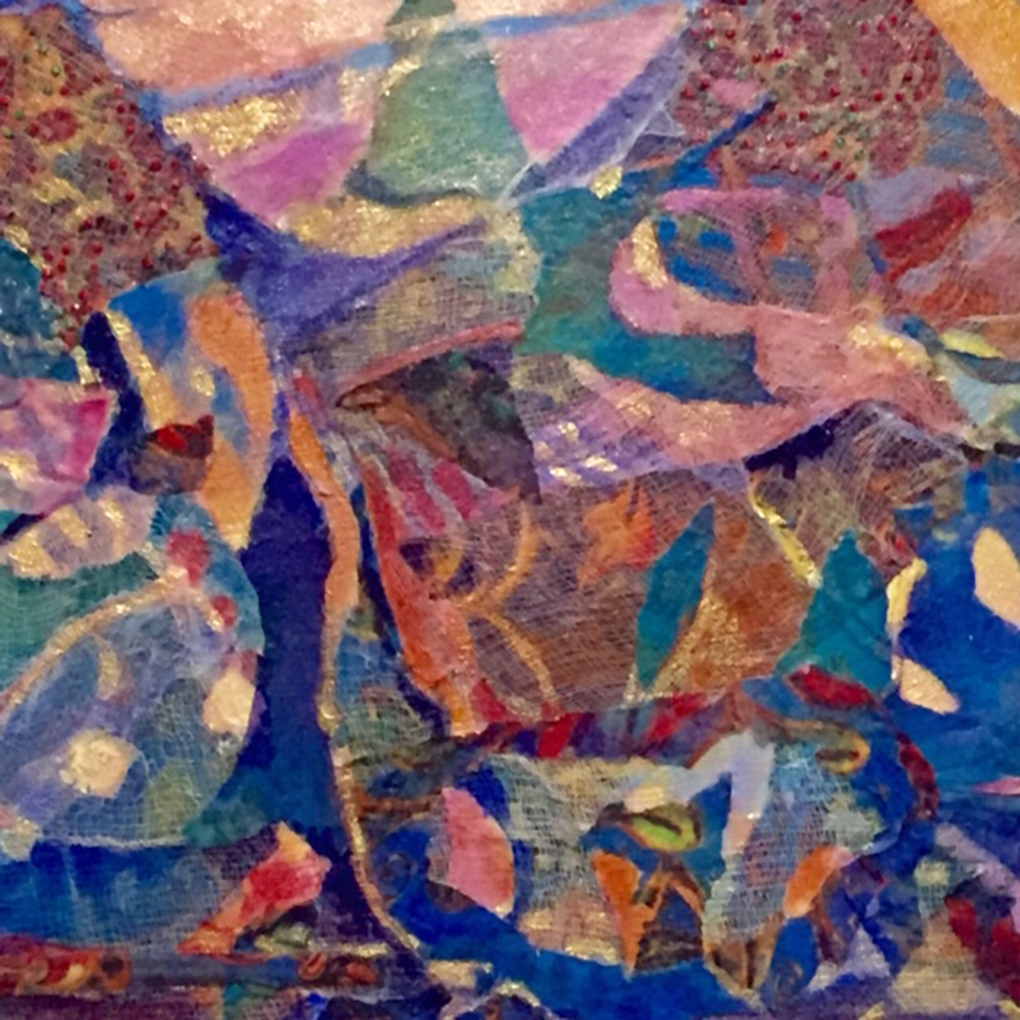 The second piece is actually a mixed media collage made entirely out of fabric pieces that were cut out and soaked in Golden’s Acrylic Gel Medium. Most of the fabric pieces came from a particular tie dyed cotton blouse that I loved, but which had developed pills and moth holes after many years of use. The blouse also had tiny beads sewn into it in places which I thought looked particularly appealing in the finished piece. When I added the gel medium, the colors in the material started to blend. At the end of the process, I added some acrylic paint in order to bring the colors and shapes together in a more highly integrated way. The idea to form a collage from an old article of clothing came to me in the middle of the night after I had been playing around with the idea of using the acrylic ‘skins’ from my painting pallet to begin new abstract paintings. I started to think about what else I had that was already lying around the house that contained beautiful colors and textures that could be used as a ‘jumping off point’ for an abstract painting. Then I ran upstairs to my bedroom and found ‘the perfect shirt!’ It took me several weeks to complete this fabric collage, and it went through many iterations before I felt that it had truly come together as a finished work of art. Nevertheless, I used the same type of intuitive process, as I did in the liquid acrylic painting that was previously described.  The music that inspired this fabric collage could best be described as a combination of chamber music and opera. 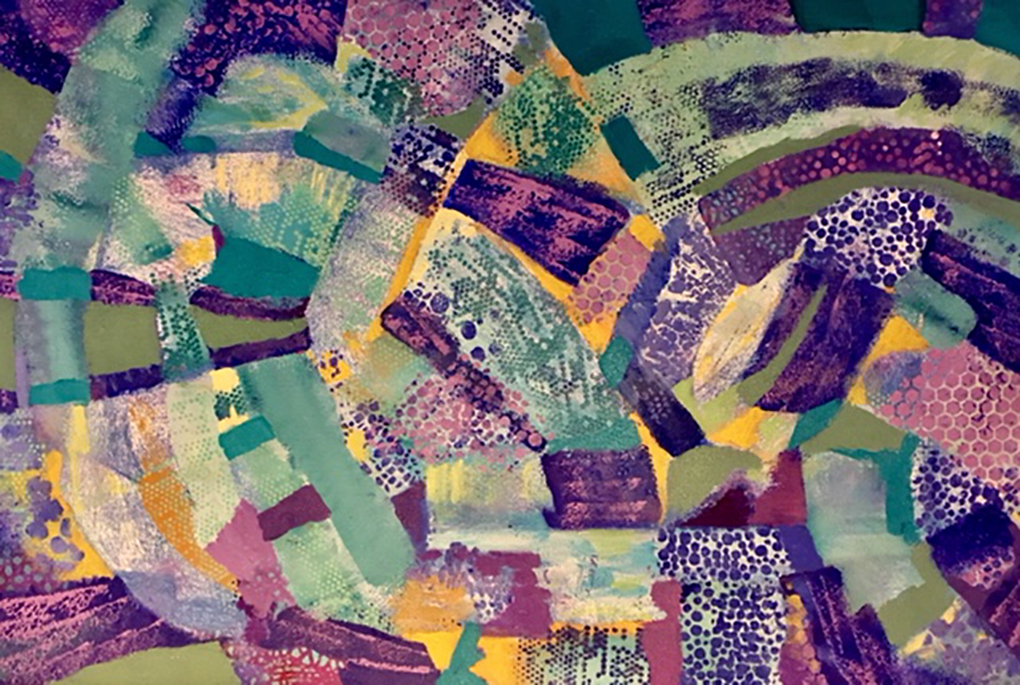 The final piece in this series, started out with the idea of using small paint rollers to create the bare bones of an abstract while listening to show tunes. The music was bold and expansive, and the paint rolled on very quickly. I had previously painted an entire 20 by 20 inch acrylic painting using only paint rollers which was fully completed in only ten minutes while listening to the same music set. However in this case, once the basic shell of a new painting emerged, I decided to add some stenciled areas. I had inherited a huge stack of plastic stencils from a very generous artist friend who had recently passed away, and had been experimenting with them for a while. Thus began a month long dance between rolling and stenciling to music until the above painting came together into a form that I could finally call ‘finished’.

Although the above three paintings all used different kinds of materials, different color pallets, and expressed different sentiments, they were all created using a very similar process. This process involved allowing music to to guide me in creating something intuitively out of whatever materials were readily available to me at the moment. In the case of the fabric collage and the roller painting, a lengthy process of gradual editing was necessary to form the finished product. While in the case of the liquid acrylic painting, everything came together with a minimum of effort. I enjoyed the process of creating all three of these paintings equally, and I like all three of them equally well. For whatever hidden psychological reasons, I seem to have the most pleasurable experiences painting when I allow my self to ‘go with the flow’ and work intuitively, rather than to deliberately chose a subject and to painstakingly bring it into being, one predetermined step at a time. I also tend to like my intuitive paintings best. This is not to say that I never work deliberately, but only that it feels better to me when I work intuitively (or at least when I originally start out working that way). It is my experience that each of us has a preferred way of going about their creative work, and about their lives in general, and this may just happen to be mine.