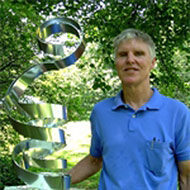 Dan Murphy is in his 45th year as full time sculptor of abstract metal sculpture. Recently, he started creating jewelry that resembles his sculptures. He is entirely self taught. His sculptures are located throughout most of the USA and also in many other countries on 4 continents. His work has been used in Hollywood movies more than 20 times since the late 1970's.

All of the metal forming methods and equipment used were designed and made by Dan Murphy. Mr. Murphy is completely self taught.